Thieves who broke into the Card Factory in Walsall were forced to leave empty-handed after being confronted and deterred by our Smoke Screen generator.

They bypassed the store's other security systems, but they did not expect the store to have a Smoke Screen.

In a desperate attempt to stop the sudden production of security fog generated by the Smoke Screen, the thieves grabbed a metal bar used to secure a nearby door and physically attacked the security device.

Designed in England and tested in Germany, Concept Smoke Screen's generators are built to withstand these brute force attacks and the criminal's efforts were in vain.

The intruders fled the scene empty-handed leaving only minor damage to the surrounding wall and outer casing of the Smoke Screen.

Head of loss prevention at Card Factory, David Pardoe said: "I've had the machine fully checked over and it remains battle-scarred but still 100% operational."

Card Factory has been trialling our security fog generators in some of their stores. David Pardoe said it was a fantastic result that highlighted the effectiveness and robustness of the Smoke Screen range. "Our surrounding products were completely unaffected and we were ready to trade with minimal disruption."

We designed our Smoke Screens to leave no residue after an activation and the units are simple to reset so company owners can get straight back to business with minimal delay. 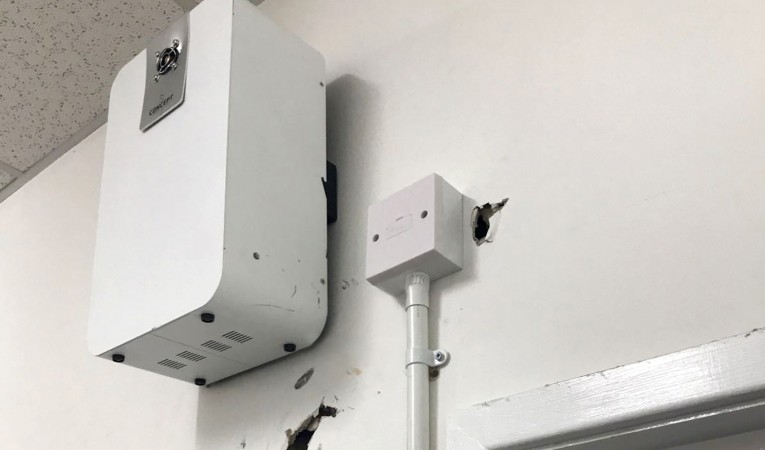