Concept Smoke Screen are always seeking innovative and advanced methods to improve on their security solutions. They have recently been working closely with camera pioneers FLIR to develop a new kind of system. One that combines the crime prevention capability of security smoke with the visibility enhancements of thermal imaging. The main focus is on improving public safety, as we'll explain.

Smoke Screen is used to repel intrusion and obscure items from view, thereby making it almost impossible for thieves to steal anything. When an intruder is confronted by a powerful burst of smoke (or fog) their immediate instinct is to get out - no amount of prior research can prepare you for the effect, it's incredibly quick, dense and disorienting. And even though European Standards (EN50131:8) stipulate that the fog has to be non-toxic, the attackers can't be certain (particularly in areas outside the standards' jurisdiction), yet another thought for them to process in an instant.

Continuing on the subject of standards, it's key to note that security fog should not be used to create a 'mantrap'. That is, the installation should serve to funnel thieves out the premises and not try and capture them inside*. A cornered attacker is more dangerous and you don't want to further increase the threat of damage to property and people (including the attackers themselves ... a necessary consideration nowadays).

The behaviour and reaction of thieves can sometimes be unpredictable however. There's a remote chance the thieves might be too startled to run for the exit causing them to become lost in the fog.

The time of the strike is also worth considering. In the event of a daytime raid in a bank or a jewellery store innocent bystanders may be present. In these instances, fog is primarily employed to protect the welfare of staff and members of the public rather than the goods.

And this is where the partnership comes in. FLIR's infrared (thermal) imaging cameras can detect the heat signatures of people, objects and materials in areas with low visibility. More importantly they are able to detect human presence through the dense fog created by Concept's generators.

The new TCX mini bullet thermal camera is effective and affordable and is from the first class of cameras to combine 24/7 high-contrast thermal video and high-performance built-in video motion detection. 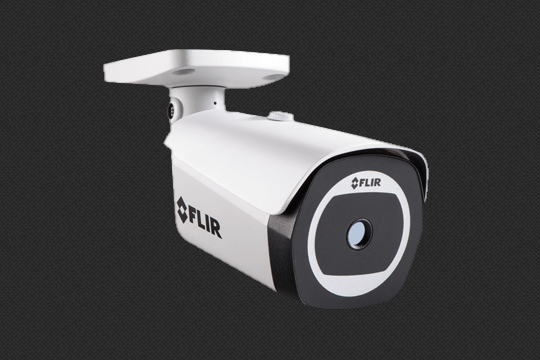 So, if attackers do become trapped, the authorities do not have to go into the crime scene. They can gain all the information they need from the control room operators to determine if the attack has been neutralised. And more importantly, this technique can be used to locate members of the public as well.

"the FLIR cameras changed the whole situation with that offering, we are finally able to offer our customers a high quality thermal solution that is attractively priced as well. We believe that with the combined solution of security fog and FLIR cameras, we will be able to offer businesses a comprehensive and affordable solution."

* Our sales representatives are therefore rigorously trained to always quote for the correct amount of machines, in the right locations, and to advise and recommend on lower budget options as well.