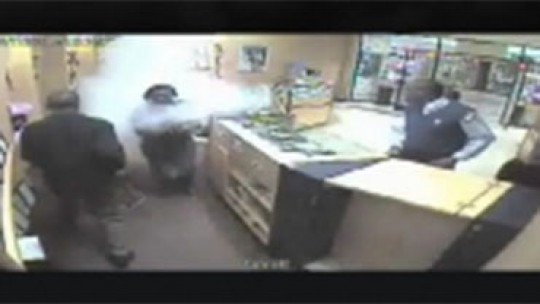 A group of armed thieves got more than they bargained for when they attempted to hold up a jewellers in a shopping centre in South Africa recently.

They were thwarted by a barrier of security fog generated when a quick thinking sales assistant triggered the Smoke Screen Rapid HP unit that had been installed 1 month before.

The robbery lasted just 23 seconds as the thieves were forced to leave the centre empty-handed.

Shortly after the store opened on a seemingly quiet Wednesday morning, the organised gang of 6 entered the shopping centre in Johannesburg, divided themselves up, grabbed the security guards and started the robbery. The smoke screen was set off.

The criminals were taken aback. They continued to try and reach the safe. The smoke filled the shop. They could no longer see what they came to take and their escape route was quickly disappearing from view. Sensing failure, they ran. The crime was over, as quickly as it had begun, nothing was taken and nobody was hurt.

When the police arrived, the suspects were long gone.

Fast, violent jewellery theft has become more widespread of late and effective, preventative security fog solutions are at the forefront of the battle against this increasingly prolific breed of daytime raid. Visit our Video Library to see the actual footage of this dramatic event, it is also available on YouTube.