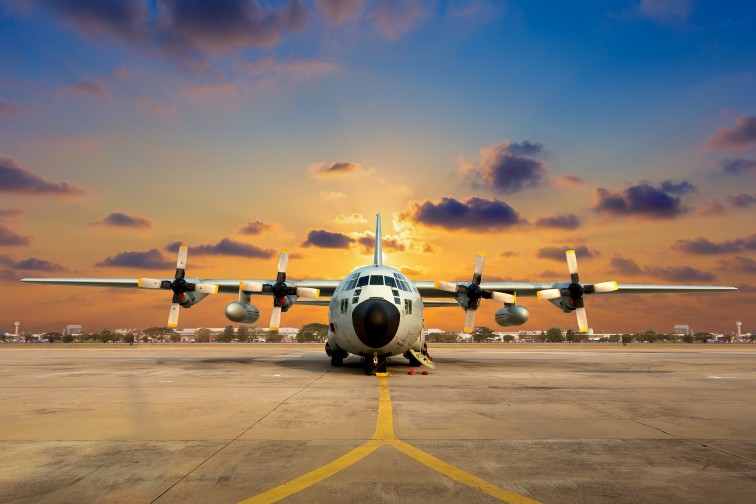 The Lockheed C130 Hercules transport aircraft first entered service with the Royal Air Force way back in 1966. Since then, this workhorse has clocked up millions of airmiles and has been a stalwart of the RAF transport fleet.

Like most aircraft of it's type the Hercules fuselage is pressurised in flight to provide comfort and safety for crew and passengers. Unfortunately, like most pressured aircraft, it develops leaks, allowing pressurised air to escape into the atmosphere. This problem is exacerbated by the large cargo doors situated at the rear of the aircraft.

The normal practice is to keep pressurising air inside the cockpit and fuselage until eventually the pressure pumps cannot keep up with the leaks. When this occurs, the aircraft is grounded and sent off to have the leaks patched.

Prior to 2000 the technique for locating leaks was almost the same as finding a hole in a bicycle inner tube, only without the bucket of water. The aircraft would be parked up outside the maintenance hangar at RAF Lyneham and external panels removed to reveal the inner skin. The pressurisation system is run up to increase internal pressure within the aircraft. Members of the maintenance crew then walk slowly around the aircraft listening for hissing noises, and when the leaks causing the hissing are located, they are marked with a wax crayon.

One by one the leaks are patched until eventually the pressurisation of the aircraft reaches an acceptable level. This farcical process could take several days. A slight improvement was made in 2000 when a FLIR (Forward Looking Infra-Red) camera was purchased. This was able to pick out slight increases of temperature where leaks occurred. Unfortunately, it also picked out internal lights and reflected heat from the sun.

At the beginning of 2001 a member of the Lyneham Ground Crew read about a security fogging system that was being used with great effect to defeat intrusive criminals. He wondered if the fog created by Smoke Screen could be used to identify the elusive leaks. A call was made to the Maidenhead factory and within a few weeks a suitable Smoke Screen generator had been heavily modified and redesignated as an Aircraft Leak Testing System (ALTS).

Several weeks later arrangements were made for the prototype ALTS to be field trialled at RAF Lyneham. Your author and Trevor Dunnington conducted the trial. To say it was a success would be a massive understatement. The unserviceable aircraft was pressurised, the fog released and immediately the sources of multiple leaks were identified. The modified Smoke Screen had taken less than an hour to complete a process that, in the past, could take days. The RAF were delighted and, after a long period of testing and classification went on to purchase two machines.

OK, so this wasn't exactly a massive commercial success as far as Concept was concerned. However, we drew satisfaction from the fact that a pair of Smoke Screen machines would make the work of Airforce technicians easier, and the lives of flight crews and passengers that little bit safer.