The Rise of ATM attacks in Europe 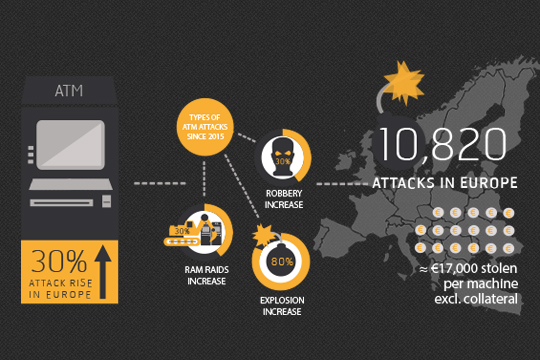 Last year the European ATM Security Team (EAST) released a crime report that revealed a growing concern over the rise of ATM attacks in Europe. The study announced that the amount of attacks had soared by 30% since 2015. This data indicates that cash machines are now highly vulnerable to attacks such as explosions, ram raids, robbery and cyber invasions.

Since 2015 the use of explosives to attack ATMs has risen by a disturbing 80% with a total of 492 attacks reported in just the first six months of 2016. The nature of these violations, such as explosive attacks, not only results in loss of money but causes damage to property, and can potentially threaten lives.

Therefore, going forward in 2017 it is clear that these crime statistics need to fall to secure a safer future. Whilst various security measures can be put in place, Concept Smoke Screen (CSS) is confident that a deployed Smoke Screen will put a stop to threats to ATMs immediately. An activation of the Smoke Screen will reduce visibility rendering it impossible for thieves to successfully execute an attack.

We've gathered together EAST statistics depicting the rise of ATM attacks and teamed them up with some of our success stories to illustrate how CSS can help: